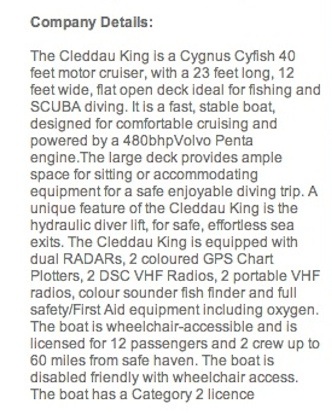 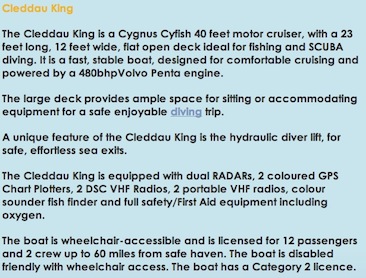 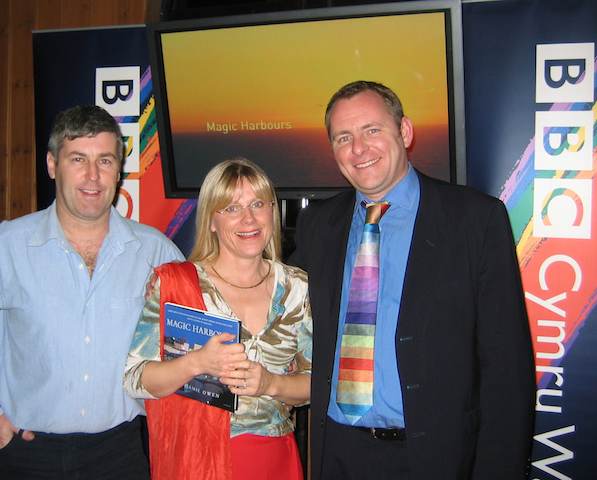 At the launch party in the Norwegian Church, Cardiff Bay, of Jamie's 'Magic Harbours' book 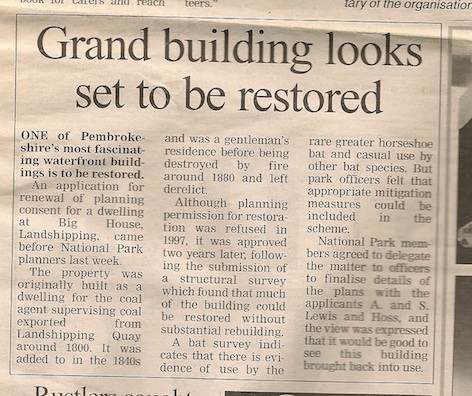 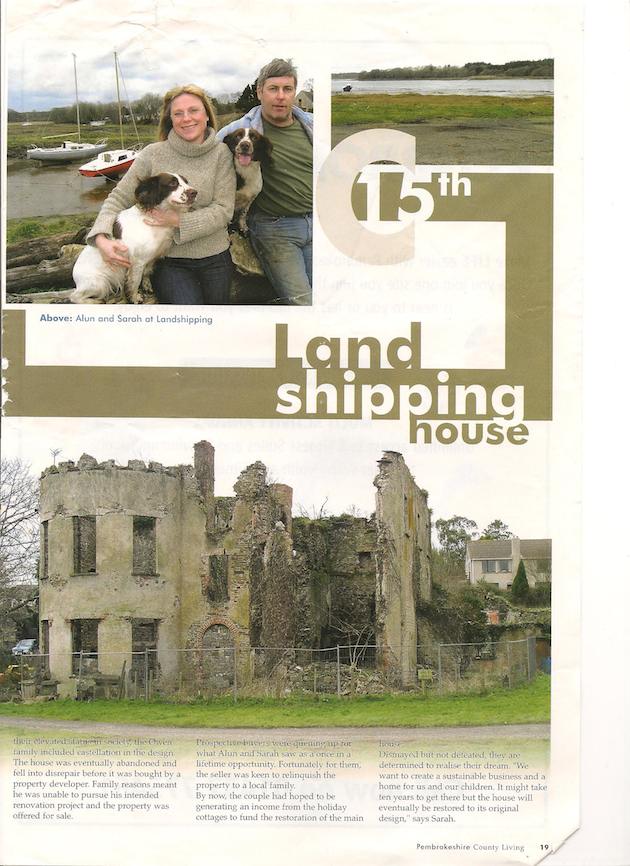 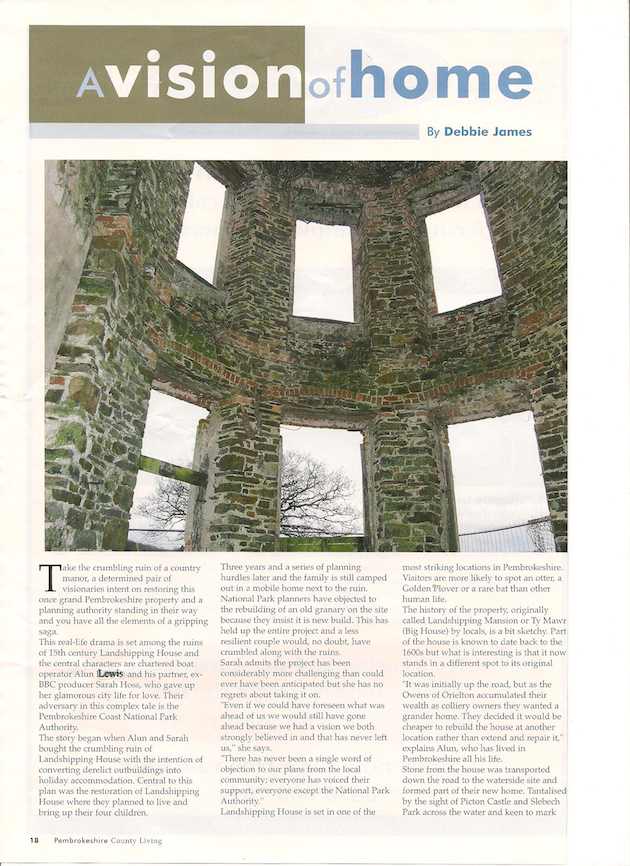 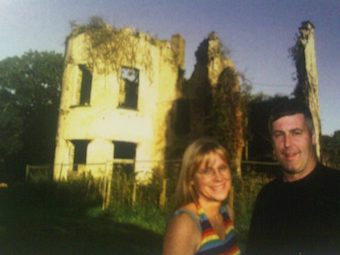 Published by Gomer Press and reproduced in the Western Telegraph

Under the bridge we sail, past Burton - the fairy tale Benton Castle hiding in the trees - around a bend in the Cresswell river and on to Lawrenny, famous in Tudor times for its oysters. We progress onwards up the Daucleddau. We used to motor up here in a little dinghy when we were kids.

The cheap outboard engine would generally overheat at this stage and then we'd face the long row back to Pembroke Dock. My father said it was character-building, and he was right: I've made a point since of not buying clapped-out secondhand outboards.

At Llangwm we drop anchor. John, Paul, Will and I haul the punt over the side of Mascotte for the short journey to the shore. Thirty feet off the beach the punt's outboard motor breaks down, its propeller wrapped in thick, green weed. It is just like old times. Ellen Skirm is in her 90s. Sitting on the bench looking across Llangwm beach, she remembers this village when it was a busy little port.

Her grandmother was one of the original Llangwm women who still have legendary status in these parts: the Llangwm Cocklewomen. In her childhood, she says, the men of the village would fish and collect cockles and mussels, but it was the women who would trudge around the towns of Tenby, Haverfordwest, Pembroke Dock and Tenby selling their wares, gone for days at a time.

The men, she said, would remain in the village or on the boats.

Further up river is Landshipping. Set back beyond high-water line, in amongst the trees, is a huge, centuries-old ruin of a once great house.

This will one day be home to Alun Lewis and Sarah Hoss - they live in a couple of mobile homes behind their restoration project. But before I tap on their door, I wander around to see what they've let themselves in for.

They are braver than me - this will take a lifetime of love and lots of money.

Alun bounces out of their temporary accommodation with all the conviction of a man who knows there's no going back on his grand design. He runs diving and fishing trips.

Sarah was a former colleague of mine in BBC television, but she's given it up to come and live the good life on the banks of the Cleddau. Watching their children play in their huge garden on the side of the river, who wouldn't desert city life?

Sarah offers to make dinner for us on the condition that we go and catch it. Alun and I wander over their garden to the wooden fishing boat his father and grandfather used. Watched intently by his spaniel - with its head cocked to one side - Alun pushes us off the mud and we spend an hour fishing with compass nets as generations of his family have done...

...We settle down to an early dinner in the garden looking onto the river; there follows a splendid feast of lobster, mackerel, beef and strawberries. I'd come here expecting to meet two weirdos who'd given up civilisation for roughing it - I leave without wanting to. These two have come to the upper Cleddau to restore a beautiful ruin and make a dream come true; even if their dream is never realised, it's a great place to watch and wait. 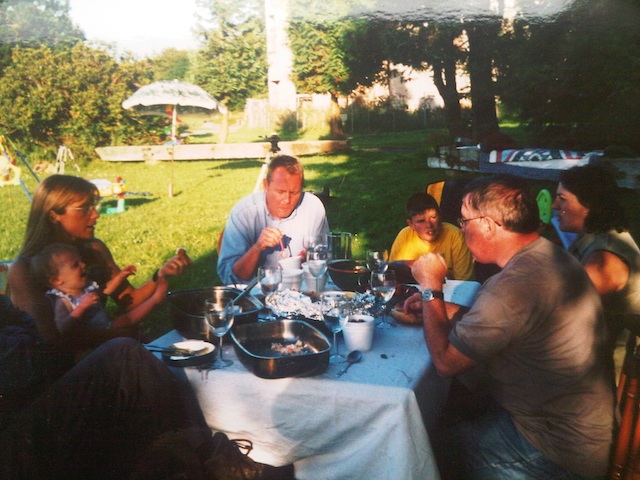 with the BBC's Jamie Owen, photographer Martin Caveney and the family having dinner on the lawn.

Taken to promote the project during the Jamie Owen BBC series. 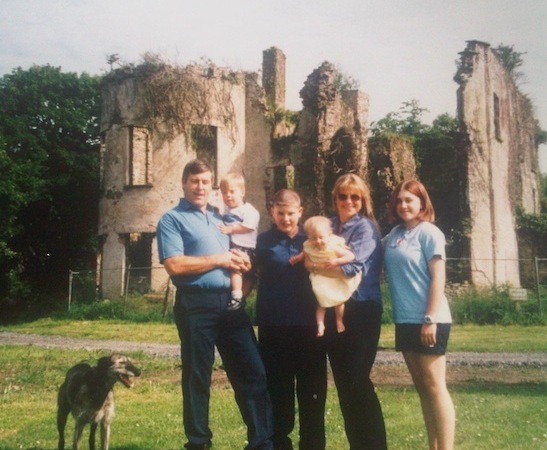 0760YE001
HTV0172
HTV Production
GRASS ROOTS
EPISODE 001
In this new series of GRASS ROOTS, presenter Hywel James returns to our screens with some more tales from the Welsh countryside.


Food, wine, horses and eco friendly roller coasters all feature in this week's programme, offering a real mix of stories from all over Wales.

Between June 25th and July 3rd, Pembrokeshire will become a haven for all fish lovers - both catchers and eaters! From coarse to sea fishing; and from the preparation to the cooking of the catch, the Pembrokeshire Fish Festival is sure to please all appetites - and Hywel James is there to 'mussel' in on what the festival has to offer. He heads out to sea on the Cleddau King to trawl for his supper before coming home to dry land to be shown the best way of cooking the freshest sea fare.

Further East, Hywel visits Cardiff's Harness Festival that was held at Trelai Park in Ely earlier this year. Attracting some 2000 visitors, the festival brought a taste of the countryside to the capital, introducing many to the equestrian sport for the very first time.

In North Wales, we hear of the World's first people powered roller coaster which recently opened at Greenwood Forest Park in Snowdonia. The eco-friendly Green Dragon was designed using a funicular system previously used in the slate mines and can reach a top speed of 25 miles per hour. Intrigued? Join Hywel as he finds out more.

And back in Cardiff, Hywel meets up with restaurateur and wine connoisseur, Francis Dupuy for his verdict on Welsh wines. As part owner of the award winning restaurant, Le Gallois and proprietor of both an impressive wine emporium and a city centre café, Francis is an authority on fine food and drink, but what will he think of this year's home-grown wines? 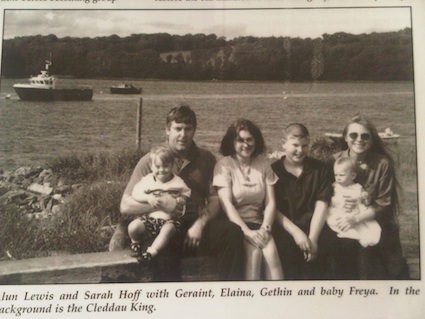 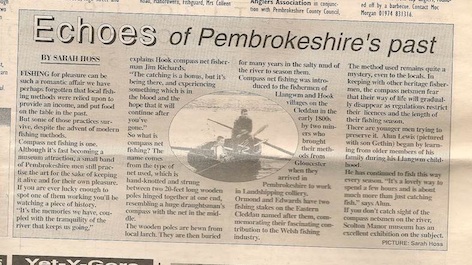 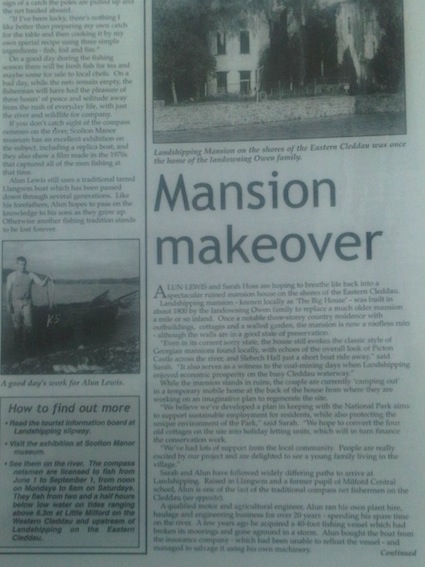 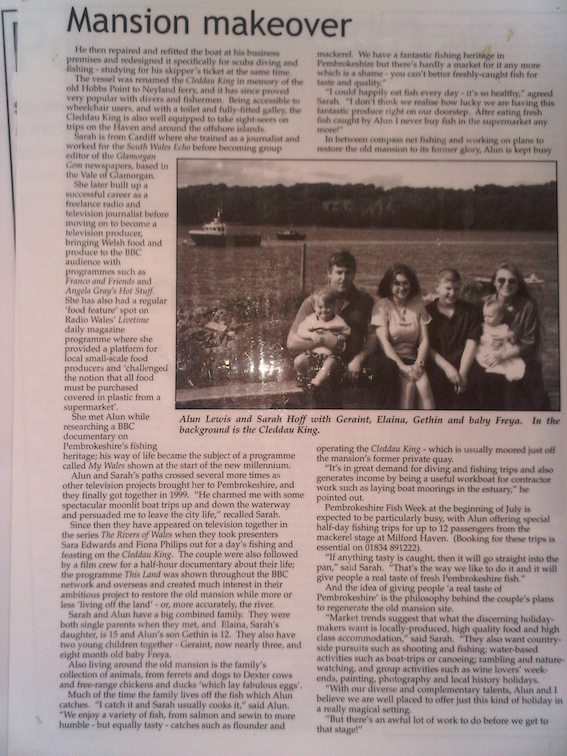 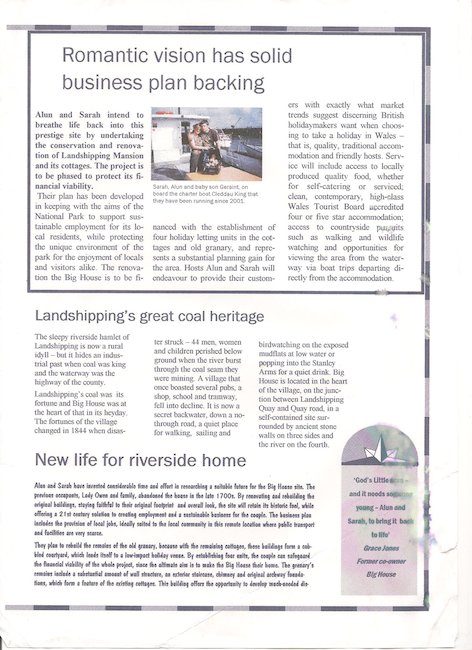 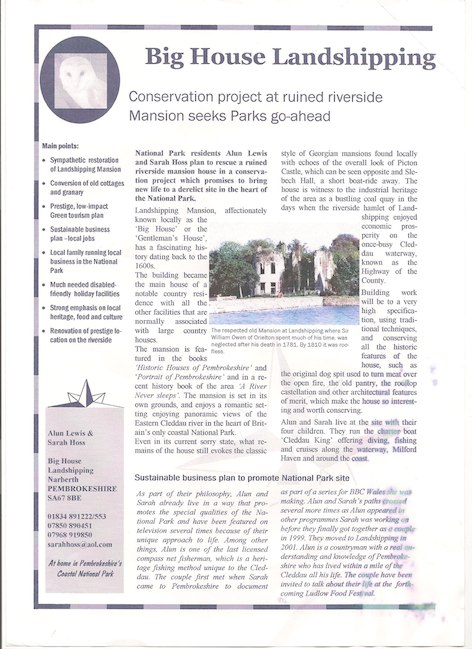 It showed the way of life of Alun and his wife Sarah and their family on Cleddau King, a boat we use for diving.

The program is on again on Friday12th April on BBC2 at about 19.30. Areas of Skomer were shown as well as the Puffins and Manx Shearwaters landing at night

It also showed our divers diving over at Skokholm Island, a very interested film, should not be missed.

It was also given critic's choice in the Sunday Times. 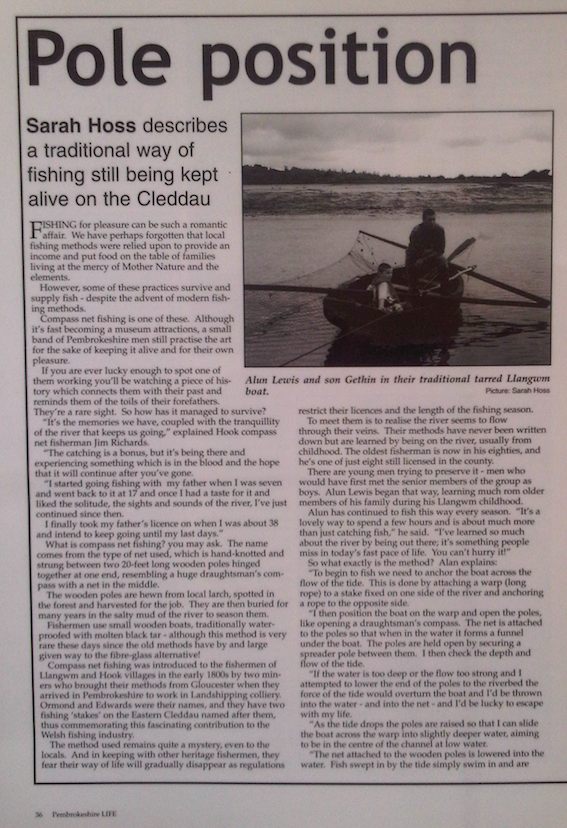 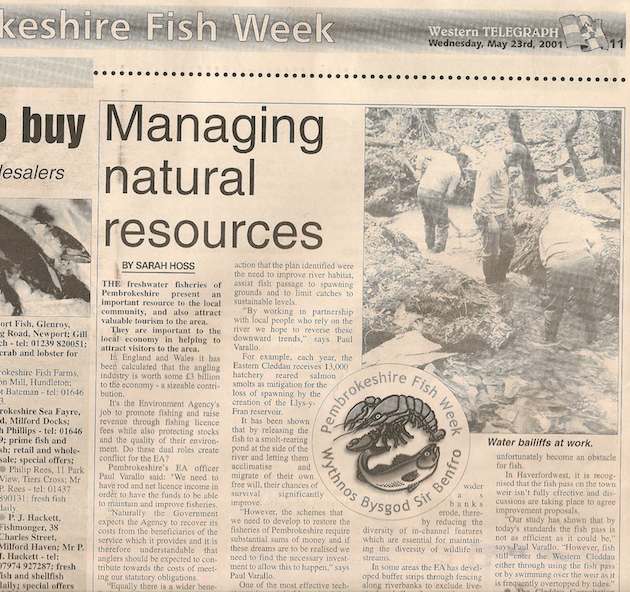 The stunning beauty of Pembrokeshire and the passion it inspires has led to the county being filmed in a special series being shown across the UK on BBC2.

‘This Land’ features many outstanding landscapes across the country, with the Pembrokeshire programme (BBC Two Wales 7.30pm Monday April 8 and on network BBC 2 Friday April 12 at 7.30)illustrating the land through the eyes of people who have a real love and empathy with the area.

Compass net fisherman Alun Lewis harks from the fishing village of Llangwm where he spent his formative years learning his craft. Now with fiancée Sarah, the couple are setting up a family home right on the banks of the Cleddau where they intend to raise their children while restoring a ruined mansion at Landshipping – known to the locals affectionately as ‘Big House’. The couple originally met when Sarah came to Pembrokeshire while researching food traditions across Wales. They hope this programme will go some way in raising awareness of the often forgotten heritage of the Cleddau and the haven, as well as a glimpse of their life together as they move to live at the riverside and prepare for the birth of their new baby in August. 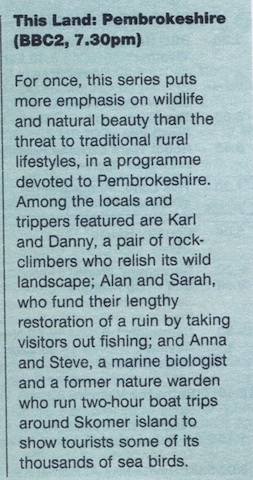 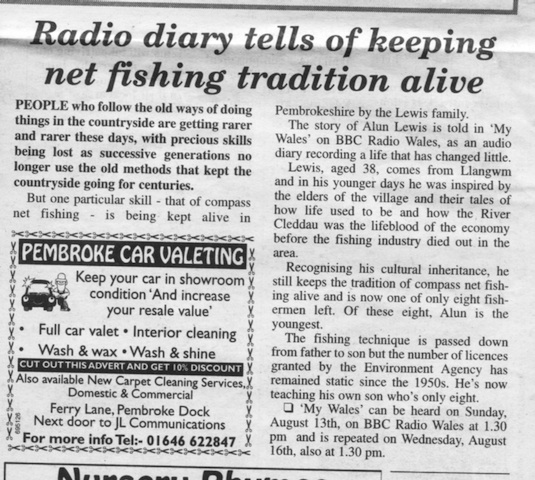 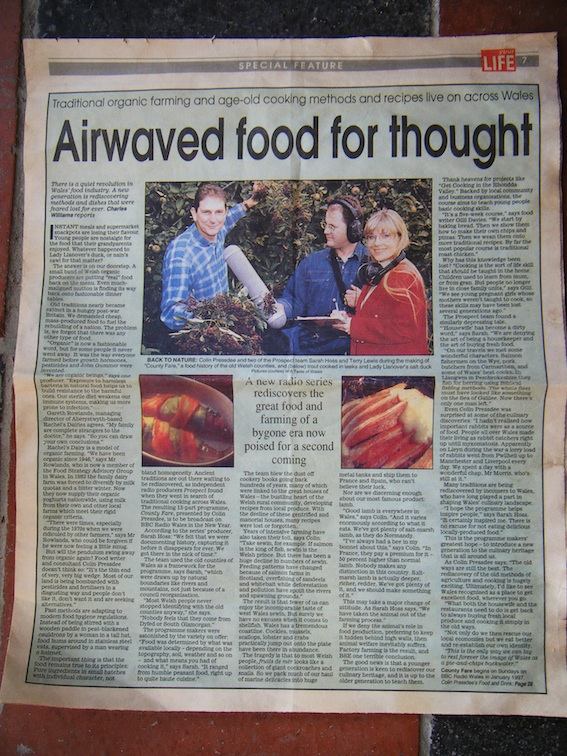