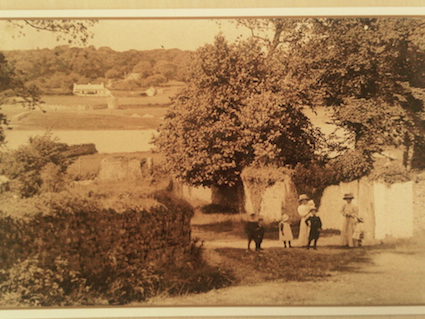 The oldest picture we have found - of the lane leading to the Big House site judging by the dress taken in Edwardian or Victorian times.

The first time I went to the Big House site we met Dr Rob Llewellyn Davies, or 'Dr Rob' outside the gates. We had landed to go to the then nearby pub the Stanley Arms (which alas closed down many years ago). Dr Rob was in Landshipping researching the history of the houses in the village for a book about the area.

The slipway next to the house provides public access to launch boats when the tide is right. This access to the eastern Cleddau is called Landshipping Ferry and was built by Mr Watkin Jones and Mr Ray Leavesely, the former owners and members of the boat club. Watkin, now aged 78, started boating for pleasure from Landshipping in 1955 and founded the Landshipping sailing and boating association as a way to establish and maintain moorings in this very tidal stretch of water. Dr Rob enthused me with great stories of the old house, which was in the past called the New House. He had spent hours interviewing the then owners, Grace and Watkin Jones and published some of their old pictures in his book. Dear Grace passed away in 2004.  Watkin has carried on her legacy of managing and maintaining the slipway area and surrounding land that he owns. He also worked on the building alongside Alun and every day was a great source of help and advice. Watkin was happy to help us by working on the project that he'd always hoped to complete himself and keen to help us fulfil our dreams for the place and eventually wanted to wave us off and welcome us back from our planned adventures. 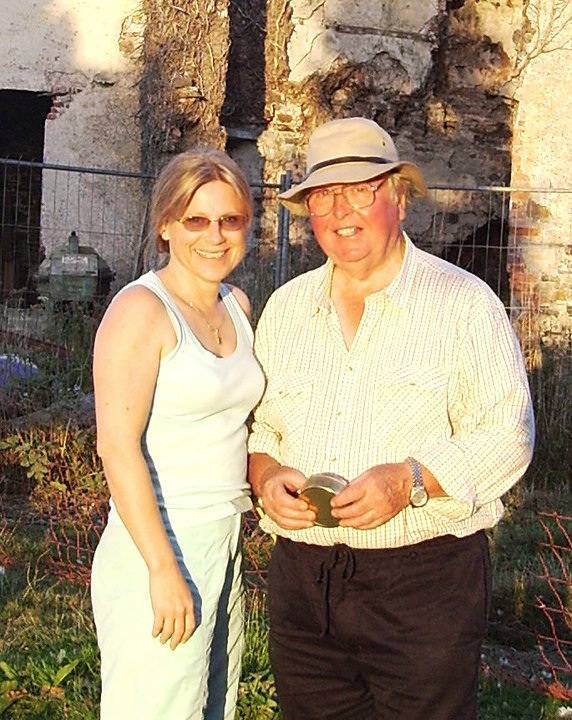 with Watkin, former owner of the project.

Landshipping was once at the centre of a thriving coal mining industry when Pembrokeshire was part of the south and west wales coal mining area. It was once a bustling village, with schools, shops, businesses and pubs, centred round the dangerous, dark and dirty business of coal-mining and all the fields adjacent to the river and the village's dead-end road hide evidence of its industrial past, now swallowed up with vegetation. Many residents made do with clom houses, (which had to be erected in one night) and lived in appalling conditions.

Landshipping is the site of a terrible Welsh mining disaster. The main clue today to its sad past is the miners' memorial plinth that was erected in 2002 on Landshipping Quay to commemorate the almost forgotten event in 1844 that effectively changed the village for ever. The lost souls of 44 miners - some young children, other believed to be women as well as men - remain where they died, drowned under the riverbed in the now quiet and virtually deserted waterway that the house looks out on.

In the 'Restoration Home' programme, it was suggested that the quay at the Big House was used for the exporting of coal mined from nearby seams; I have not heard any evidence for this, and Watkin insists that isn't correct.  During the time I lived there I don't think we ever found any coal on the site. More likely, the quay was built by the former developer of the house - Sir John Owen - to make for easy access to the river. The owners of Picton Castle opposite were apparently rivals, and they had a similar landing stage at the Rhos on the other side. It was all about 'keeping up with the Joneses" as far as I can tell and this is supported by the information the programme has revealed about the political rivalry between the two households. Coal was definitely shipped at Landshipping Quay, which is a fair trek away down a steep hill. It just doesn't make sense to move coal 'up river'.

The lower Landshipping Quay (down the road from the Big House, follow the signposts) was down-river, and always afforded access by having navigable water regardless of the tide, which enabled boats to shift coal loads continuously; whereas the quay wall at Big House dries out twice a day - so would not have been a viable place to collect loads from.

Coal was transported in drams along a narrow-gauge railway line - which ran from the local collieries down to Landshipping Lower Quay and onto boats - the remnants of the railway line can still be found. There was no railway at the Big House.

It was also suggested that when the Landshipping Quay coal mining disaster happened coal mining came to an end in Landshipping. This is not correct: after the disaster, the West Meadow Colliery (in Landshipping - as you come down the road from Clare House on the left) opened up and there is documentary evidence which proves this. This colliery had the first steam-driven winding gear in the locality (whereas previously the gear was wound up and down by women); another detail that perhaps merited a mention in the recent programme but was missed. I am happy to report it here. 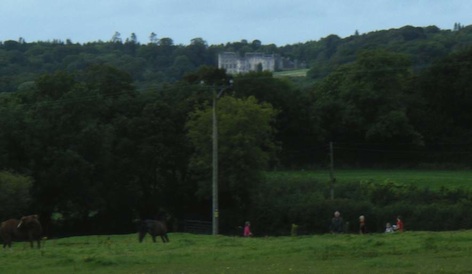 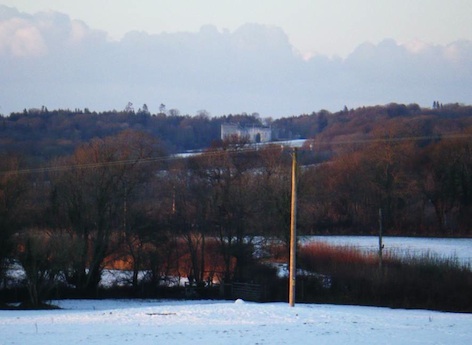 There are believed to be connections with the waterside house in Landshipping and the imposing Picton Castle that stands above it on the sunny side of the river. When I first saw it I was struck by the similarity - Picton is much bigger and older - but the curved shape and style of Picton (and indeed Slebech a little further up the river) seemed echoed in the shape of what was left of the bays of the Big House. Were the owners extending it to 'keep up appearances' perhaps and compete with their lofty neighbours across the water?

The BBC's historian has uncovered a connection between the two households, involving Sir John Owen - the son of Hugh Owen who owned Landshipping's Big House. Watkin had a theory that stone from the former Landshipping Great House - up in the village near where he now lives - was used in the construction of the extensions to the 'New' Big House. This is mentioned in the recent TV programme - it was Watkin though, not the BBC, who came up with this theory and credit should go to him. The programme reveals a story of political intrigue and a battle for democracy with a connection between Picton and the Big House. The story I was told was much more domestic and of friendly rivalry - that the two houses would have an annual 'Ready Steady Cook' competition, meet in the middle of the river for a tasting and then the winning cook would host the meal at their place with the rival household.

Dear Geoffrey Phillips, now sadly passed away, the owner of Picton Castle, could rattle off the history as if the Civil War happened 20 years ago. He talked of Nelson and Lady Hamilton as if they were dear departed friends whenever Alun and I and the kiddies popped over the other side of the river by boat and walked the mile or so up the lane to see him. The new BBC programme will explain the role of Sir John Owen and takes the story to Parliament and the development of our democratic system.

Back in Pembrokeshire, Watkin remembers the cottages occupied and an old lady whose mother had been in service in the main house. Watkin has been associated with the place since the second World War and became one of the first wardens for the then relatively new Pembrokeshire Coast National Park Authority and in this role he became involved in numerous other restoration projects before retiring in the 1980s. Watkin still lives in Landshipping.

When the estate was sold in 1922, the Big House was sold as a good source of building stone, set in just under 3 acres.

A gallop across the years

1750s – Landshipping House built – Coal agent’s House * (possibly using stone from the former Great House up in the village – this hypothesis is from Mr Watkin Jones, former owner of the Big House site).

1830s – house altered to a design of William Owen (not related to the Owens of Orielton, owners of the Landshipping Estate) *

1856 – advertisement for the Landshipping Estate for rent. *

1910 – photograph of an already ruined house appears on a postcard

1922 - Landshipping Estate (including the Big House site) sold in a large selection of lots. The Big House Cottage and site is Lot 30.

1960 – Property purchased by architect Ray Leavesley of Worcs from Bert Williams and wife. Apparently a land swap deal was struck in which the couple moved into a house up in the village and Ray acquired the Big House site.

1970s – Ray Leavesley & Watkin Jones begin the restoration of the site - starting with rebuilding the quay wall. They build the impressive gate posts and install iron gates from a station in Birmingham to create the current entrance gates. Photographs taken at the time show the the work in progress and Ray’s young daughter Kerry siting in the bucket of his JCB during the work.

1999 – photos show the Big House virtually hidden behind a massive wall of ivy. The ruin is hardly visible from the river. Clearance of the ivy starts and the house starts to emerge.

Nov 2001 – property becomes home to Alun,  Sarah and their children. They move into a caravan home with the permission of the owners into the grounds to the rear of the Big House to begin their restoration project and apply for planning permission (ref PCNP)

2006 -11– A functional space is created in part of the house structure.

and discussions with the author, and the former owners of the property and their photos; research at the Pembrokeshire Coast National Park offices planning department and personal records and recollections.